The Washington County Sheriff’s Office is pleased to announce the promotion of one of our finest deputies to the rank of Sergeant. Deputy Adam “Bula” Andresen was recently honored at his promotion ceremony recognized for the many impressive accomplishments he has already has already achieved to this point in his young law enforcement career.

Bula, as he is more commonly known by family and friends, is actually Hawaiian for Ball and a nickname he has carried with him since childhood. Deputy Andresen started his career working in a civilian capacity for the Washington County Sheriff’s Office nearly six years ago. It wasn’t long before he, and everyone else, realized that working in law enforcement was going to be a very good fit for him.

Bula graduated from the Utah POST Academy in 2006 with Special Functions and Basic Corrections certifications and proceeded to see immediate and consistent success while working at the Purgatory Correctional Facility as a Corrections Deputy. In 2008, Deputy Andresen returned to the POST Academy and received his Law Enforcement Officer certification, which allowed him to transfer to the Patrol Division, where he took full advantage of the opportunity to expand his law enforcement knowledge. Since that time, Deputy Andresen has continued to excel at every challenge he has been given. More importantly, he has solidified his reputation as an effective communicator, a willing and capable leader, and a valued and respected member of our local law enforcement community. Deputy Andresen is probably best known for his ability to deescalate volatile situations with his calm confident demeanor, a skill that has been tested and proved time and again during his career.

It is with genuine excitement and extreme enthusiasm that we welcome Sergeant Adam Andresen as the newest member of our supervisory staff at the Washington County Sheriffs Office. 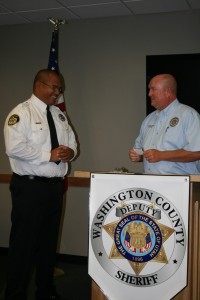