On June 23, 2012, the Washington County Sheriff’s Office hosted our 3rd Annual 3 on 3 Basketball Tournament. Over 30 staff members participated in the tournament, which took place at Dixie High School. The Sheriff’s Office hosts a PT event each month to help promote good physical fitness among our staff, and this has certainly become one of our more enjoyable events. It was a great event not just for the players, but for everyone who attended, including a significant number of co-workers, friends and family (especially children) who came out to support our employees. The Washington County Sheriff’s Office would like to congratulate the champions of our 3rd Annual 3 on 3 Basketball Tournament, the team of Carson Ferrin, Jake Schultz and Jay Strausser! The tournament was extremely competitive, the championship game even came down to the final seconds, and the Champions had to win 6 games in about 3 hours to take home the Championship! The tournament placed the following teams:

This year also saw the introduction of new award, The Jackie Moon Award, which was voted on by those in attendance and went to the most “entertaining” player in the field. It came as no surprise to anyone in attendance that Deputy County Attorney Zac Weiland, a favorite son of the Sheriff’s Office, took home the award! We are already looking forward to next year’s tournament!

The Sheriff’s Office would also like to extend a special thanks to Sergeant Trevor Benson and Sergeant Ryan Larkin for helping to coordinate and facilitate the event. Without their help, an event like this could never take place. We also would like to extend a very special thanks to the Dixie High School Principal Larry Burgenson and his staff, all of whom graciously prepared and allowed us to use the school’s facilities for this event. 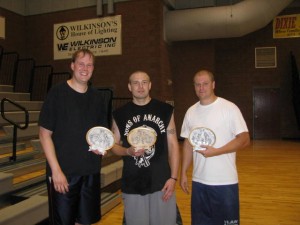